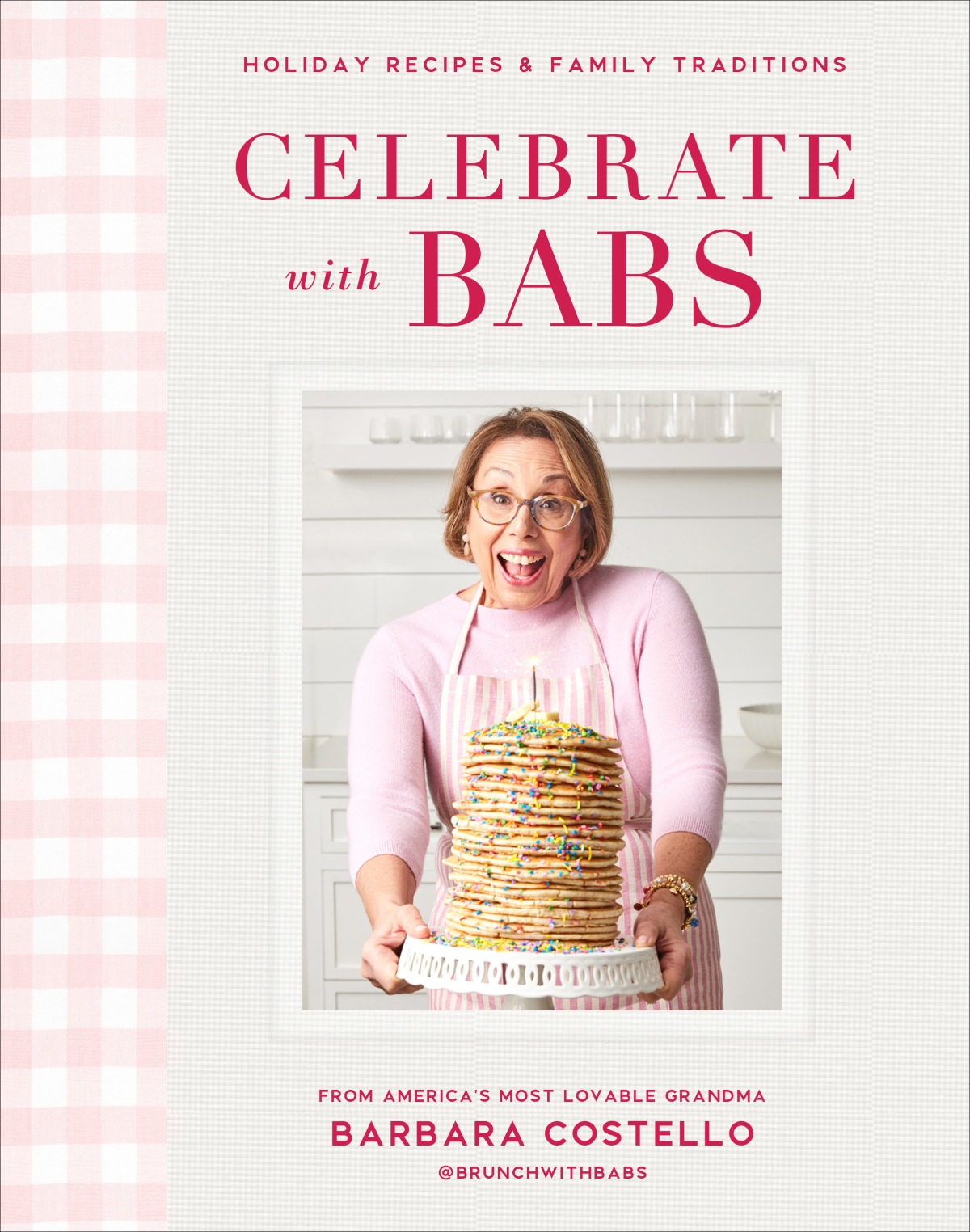 Barbara Costello didn’t do social media when she first helped her daughter by posting a cooking video on TikTok.

“I thought TikTok was all about dancing,” says Costello, the mother of four and grandmother of eight, who is known as Grandma Babs. Her first post was in April 2020 during the pandemic. Nine months later she had 200,000 followers. Now it’s closing in on two million.

“By the time we hang up, you’ll probably have 20,000 more followers,” I tell Costello who is in the car with her daughter, Liz Ariola, on their way to a book signing.

I’m only half joking.

Besides TikTok followers on her Brunch with Babs site, Costello also has 660,000 followers on Instagram. In comparison, I have 1989. Not that I’m jealous.

Costello, who is 73, is considered a granfluencer—a growing trend of older people who are kicking it on social media. And now she has a cookbook, “Celebrate with Babs: Holiday Recipes & Family Traditions” featuring one hundred of her tried and true handwritten recipes that she pulled from her wood recipe box.

“I started collecting recipes before the internet,” she says. “You used to go over to someone’s house for dinner and leave with recipe cards of what was served that night.”

The book is divided by holidays and celebrations which are a big deal in the Costello family.

“We’re Italian and we like big noisy get-togethers,” she says. “My mom was one of nine and I have 21 first cousins. Even after Bill and I got married there were so many of us that we still sat at the children’s table when everyone got together.”

Originally from the Chicago area, Costello taught middle school in Schaumburg before the family moved, ending up in Connecticut where they’ve lived for decades. Costello opened her own pre-school (they called them nursery schools back then) in the basement of her house. She thinks the skills she learned as a teacher and administrator are part of what connects her to her audience. And she is all about connections.

“I still get invited to the weddings of my preschoolers,” she says. “And many of them have remained friends with their pre-school classmates and they’re at the weddings. I think that’s wonderful after all those years.”

Costello describes herself as having gone from zero to 60 miles-per-hour.

“I never expected this,” she says. “People ask me if I have a business plan and I say what’s that? I’m making it up along the way.”

It was Ariola who got her mom in the business. Social media savvy, Ariola writes the popular mom blog Mrs. Nipple blog (get it—aureole/ariola) and asked her mom for help during her pregnancy. Despite morning sickness, Ariola was trying to launch a TikTok channel and got her mom to agree to film three videos while her two grandchildren were napping.

The first video showing Costello making her grandmother’s Greek chicken recipe garnered 100,000 views. Somewhere along the line, one of her viewers was a cookbook editor. The rest, as they say, is history.

Even though the book is divided into holidays, each section with a special memory or anecdote, Costello says they recipes are good for everyday as well.

“Recipes are recipes,” she says. In other words, you don’t have to wait until Easter to make marinated leg of lamb, apricot glazed ham, or Grandma’s Easter Bread.

Even though she was a working mom, Costello always made family meals.

“People didn’t do fast food like they do now,” she says. “And I think it’s very important for families to eat together.”

Indeed, one of her hopes for her cookbook and her social media popularity is that it will encourage people to cook more and enjoy dinner together. In the meantime, she’s going to keep cooking.

“My mom is always over the top when it comes to celebrations,” says Ariola, noting her mother’s tendency to make way too much food.

“Being raised in an Italian family,” says Costello, “ I learned that the worst thing that could happen is that there wasn’t enough food to feed everyone.”

That certainly won’t happen on her watch.

“I always look forward to our grandkids’ first birthdays,” writes Costello. “My daughter loves showering her sons with smash cakes when they have that special birthday. She strips them down and lets them go at the cake. It’s a ton of fun to see how their little personalities shine in this moment. This is not only the favorite of my one-year-old grandson Scooter, but also a hit with my toddler-aged grandkids, too. Even I love it! I’ve made this recipe as just a loaf when not celebrating a special one-year-old in the family. The cream cheese frosting and the cake are the perfect combo.”

2. In the bowl of a stand mixer fitted with the paddle attachment, beat the butter and sugar together until pale and creamy. Add the eggs one at a time, beating well after each addition. Add the maple syrup and applesauce. Beat until well combined.

3. Using a fine-mesh sieve, sift the flour, baking powder, baking soda, cinnamon, and salt into the wet mixture. Stir until combined. Spoon the mixture into the ramekins until three-fourths full. Pour the rest of the batter into the loaf pan.

5. Make the frosting. In the bowl of a stand mixer fitted with the paddle attachment, beat the cream cheese and butter until well combined. Add the powdered sugar and vanilla. Beat until smooth and creamy, scraping the side of the bowl once or twice during mixing. If desired, beat in a few drops of natural food coloring of your choice.

6. To assemble the smash cake, place the bottom half on a serving plate. Spoon frosting over. Add the remaining layer. Spread frosting over the top and side of the cake. Add decorations of your choice. To serve the loaf, spread the top and sides with frosting, and cut into slices to serve.

This easy, crisp, classic vegetable salad is a must at any summer barbecue, picnic, or pool party. This is an old recipe I’ve been making for over forty years. The flavors meld beautifully, and the fresh crispness of the veggies, the creaminess of the dressing, and the ease of making it ahead, make this recipe a winner in all categories.

15 minutes, plus at least 1 hour to chill

Traveling Through Time: Down the Danube Narrows to Weltenburg Abbey