It’s been three decades since “The Polar Express” first came chugging off the pages and into our lives, enchanting us with the story of a young boy who boards a train on Christmas Eve to take a fateful and reaffirming journey.

In the book, which has sold more than 6.5 million copies, author Chris Van Allsburg weaves a tale of fortifying traditions and intensifying feelings we already have about the holiday. It begins as a young boy listens for the sound of Santa’s sleigh bells hardly hoping to beli 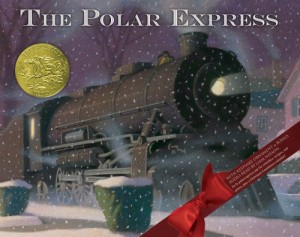 eve anymore after a friend has told him that Santa doesn’t exist.

“That theme deals with the coming of age transition that parents are reluctant to witness in their children,” says Van Allsburg, who is on a multicity tour including a stop hosted by Anderson’s Bookshop in Naperville, to celebrate the book’s 30 years of popularity.

“Their children are leaving childhood behind and mom and dad are sorry to see it happen. The book addresses that issue and might even delay the inevitable for one or two Christmases.”

Van Allsburg, formerly a professor at the Rhode Island School of Design, who used oil pastels to illustrate “The Polar Express,” giving it a dreamy fantastical look, describes that medium as unwieldy and “not particularly well suited for detail but goof for atmospheric effects.”

Interestingly, he hadn’t used it before and hasn’t since, adding to the one-of-a-kind charm to both the story and the illustrations. The book also was turned into a movie with Tom Hanks starring as the kindly conductor.

When asked about the sustaining popularity of his book, Van Allsburg says that both the train ride and the anticipation of Santa Claus are two reasons he thinks the book remains a favorite.

“This makes it an ideal book to read as the holiday approaches.” he says. “When children are already primed by the season to hear a story about the remarkable event that is just days away.”

Even if you weren’t addicted to the black and white movies about newspaper gals such as Katherine Hepburn in “Woman of the Year” and Glenda Farrell in the Torchy Blane series like I was, Renee Rosen’s latest book, “

Rosen, who plums Chicago’s history to write such books as “Dollface,” about flappers and gangers like Al Capone, and “What the Lady Wants” about the affair between department store magnate Marshall Field and his socialite neighbor, tells about a time not that long ago when women reporters were almost always relegated to covering soft news and society items.

In her latest, Jordan Walsh wants to break out of her role as a society reporter and sees her chance when she finds a deeply connected source in the mayor’s office. But despite her source and ambition as well as family connections to such great Chicago writers as Mike Royko, Nelson Algren and Ernest Hemingway, Jordan must still contend with the attitude of it’s a man’s business.

To research her book, Rosen spent a lot of time talking to reporters to find out what it was like back in the day.

“I think what I found most surprising was how the female reporters back then were called ‘Sob Sisters’ because they were assigned the sentimental stories or stories intended to tug at the readers’ heartstrings,” Rosen says about what she found when she began her extensive research. ”Sexism in the newsroom was blatant back then. Also in terms of sexual harassment, back in the day that phrase wasn’t in anyone’s vocabulary. Of course career women didn’t like it, but there was no one to turn to, no one to complain to.”

Rosen, who lives in Chicago, says she often will find herself walking down a street and thinking this is where Dion O’Banion worked (one of the gangsters featured in “Dollface”) or this is where Delia Caton and Bertha Palmer shopped (“What the Lady Wants”).

“Or in the case of ‘White Collar Girl,’ I’ve been to some of the watering holes where a young Mike Royko or a Nelson Algren would have frequented,” says Rosen, noting that she’s watched “All the President’s Men” about “a million times.”

“I can go to City Hall and walk the very hallways that Mayor Daley walked. Call me a history nerd, but for me that’s a thrill. Sometimes I do get so obsessed with a subject matter that I do find I have to pull myself back to the present time.” 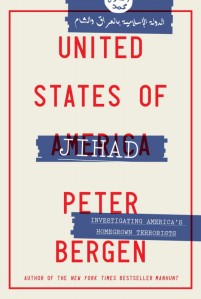 In his latest book, United States of Jihad: Investigating America’s Homegrown Terrorists (Crown 2016; $28), CNN’s national security analyst Peter Bergen discusses the factors leading to the radicalization of U.S. citizens, how social media plays a big part in recruitment and the increase in the number of women joining terrorist groups. His book, made into documentary, aired on HBO a few weeks ago.

Compiling a database of people in the U.S. who were either born or grew up here to help determine how they became radicalized, Bergen describes them as being, for the most part, seemingly ordinary. Of the 330 people charged with jihadi terrorism in this country since 9/11, 80% were American citizens or permanent residents. The majority were also well educated and about one-third were married; their average age 29. Almost 20% are women.

So what happens? Many radical Islamists become militant not only for religious or political reasons says Bergen, but also for the sense of belonging which comes from being part of a group and the need to be seen as “somebody.”

Bergen notes interesting parallels in such cases as that of Major Nidal Hasan, an army psychiatrist who opened fire at Fort Hood, Texas, killing 13 of his peers and injuring 30 more.  Educated and successful in the military, it’s hard to decipher what led him to become a terrorist while his first cousin, Nader Hasan, who was raised in the same neighborhood, is a well-established attorney in Northern Virginia.

The ease of recruitment using modern technology helps recruit from a younger group of people and crosses gender lines.

“Those drawn to ISIS skew younger,” he says adding that more females than in previous generations are becoming militant. Indeed, one in five is a teenage with the youngest being a 15-year-old girl.

But despite the alarm that acts of terrorism on American soil bring about, Bergen says that statistically they’re not necessarily a significant threat.

“In any given year, you’re somewhere between 3,000 or 5,000 times more likely to be killed by a fellow American with a gun than you are to be killed in the United States by a jihadi terrorist inspired by the ideology of Osama bin Laden,” he says.

When California was still all about oranges, Chicago ruled when it came to movies—a brief but glorious decade where local girl Gloria Swanson earned money as an extra to pay for pickles (of all things) before moving on to stardom, becoming Joe Kennedy’s mistress and then later the fading actress in the classic Sunset Boulevard. Charlie Chaplin came to town to film a

s did child star Jackie Coogan and heart throb Francis X. Bushman who lost his adoring fan base when it turned out not only was he married with five children but he was also having an affair with his co-star in the The Plum Tree which was filmed, in part on Miller Beach.

It was during these early years of the 19th century when two Chicago power house studios, Essanay and Selig Polyscope, churned out thousands of serials and silent movies.

“Almost 99% of those movies are gone now,” says Adam Selzer, who with Michael Glover Smith, wrote Flickering Empire: How Chicago Invented the US Film Industry (Wallflower 2015; $25). “But between 1907 and 1917, Chicago was the place to make movies.”

Not all is lost. Remnants of that time remain including the studios themselves. Essanay is part of the St. Augustine College campus and the Selig Polyscope Company, its S encased in a diamond still above the entranceway, is now condominiums.

And every once in a while, a gem reappears including the 1916 film Sherlock Holmes produced by Essanay Studios which had disappeared for decades only to be found a year or so ago in a French film archive.

“We’re gong to be hosting a screening of the film a century after it was first made at the old Essanay Studio,” says Selzer. For more about the event which is the same date as their book signing at the Chicago Public Library, visit Selzer’s Website, mysteriouschicago.com. Tickets can be purchased through eventbrite.com and be sure to dress in your best Sherlockian attire.

There are of course anecdotes as well.

“When you drive through the entrance to St. Augustine,” says Selzer, “you can see a cemetery across the way. One day George Spoor, the owner of Essanay, saw actor Ben Turpin walking over to the cemetery carrying flowers. Spoor said Ben, I think that’s a great thing to do, we should always take the flowers we used in the movies to the cemetery. And Ben said ‘sure boss, that’s where I get them.’”

Likening their research to a treasure hunt, albeit a time consuming one, the two not only compiled a trove of information on those early days by reading microfilm editions of now defunct Chicago newspapers at the Harold Washington Library and locating relatives of the Selig family many of whom live in and around Chicago and were willing to share their extensive scrapbook collections. The two also perused the Website, mediahistoryproject.org, a digitized collections of classic media periodicals.

What made the Windy City so attractive?

According to Selzer, it was far enough west to stay under Thomas Edison’s radar.

“Edison had—or claimed he had—patents on the equipment and if film makers didn’t pay royalties, he’d send his goon squad to wreck the equipment,” says Selzer. “The studios didn’t stay here for long, a lot of people say it was because of the cold weather but they may have moved further west to get even further from Edison. But I think the the movies got to so big they needed their own town.”

What: Book signing and chat with Adam Selzer and Michael Glover Smith