Hiding in plain sight, Chicago’s many fountains are gems of art, history, politics and culture, their stories often overlooked.

Sure we all know

Buckingham Fountain and the Crown Fountain in Millennial Park. But what about the Nelson Algren Fountain at Division Street and Ashland and Milwaukee avenues which was opposed by the Polish community and many residents near the Polonia Triangle because he wrote about life there with a brutal honesty? Or the Drexel Boulevard Fountain, originally named the Thomas Dorsey Fountain, after the South Side musician considered to be the father of gospel music which is bookend by the newly restored Drexel Fountain?

I thought not. But then neither did I until I chatted with Greg Borzo about his newest book, Chicago’s Fabulous Fountains (Southern Illinois University Press 2017; $39.95) with photos by Julia Thiel.

A news officer covering science at the University of Chicago, Borzo also volunteers to give tours of the “L” and often was asked about the fountains they passed on the route.

“I realized that people knew about the Chicago Fire and World’s Columbian Exposition which was held in Chicago in 1893 but they didn’t know anything about Chicago’s fountains,” says Borzo.

And so, because Borzo likes to chronicle the city’s intriguing icons and is the author of The Chicago “L,” and Chicago Cable Cars, he began extensively researching Chicago’s fountains, past and present. In the process he inspired his friends, who he dubbed “fountain finders,” to join in the search.

“They got a fountain buzz going and they’d say there’s one at such and such” says Borzo. “As I found out about fountains, I began to realize it’s about the artists, the ethnic groups, the politics—it’s so much more than just a pretty fountain.”

Immersed in fountain lore, Borzo connects the historic dots—or should we say splashes of water. 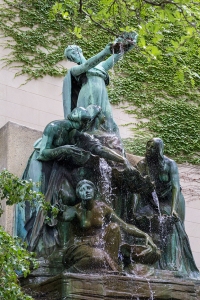 “People are very interested in the 1893 Fair and what I found is there are four fountains directly related to the fair—which were built for the fair or part of the fair,” he says. “The Rosenberg Fountain on Michigan Avenue and 11th Street was built in time for the Fair but was built near the Illinois Central Station that used to stand at 11th and Roosevelt for people getting off the train could get a drink.”

The fountain was a gift to the city by Joseph Rosenberg, a former paperboy who used to get thirsty while his rou

te. To prevent that happening to others, the fountain had metal drinking cans attached by a chain–doesn’t sound very sanitary, does it?

The Women’s Christian Temperance Union was also worried about thirsty people and wanted to provide water instead of stopping at a bar for a whiskey.

“Fountain Girl was located at the fair and people could take one of the tin cups chained to the fountain to get a drink,” says Borzo. “After the Fair, they moved Fountain Girl to the Women’s Christian Temperance Union skyscraper in the downtown and when that got torn down the fountain was moved again to Lincoln Park. The city didn’t ban shared drinking cups until 1911. The Illinois Humane Society had about 60 fountains with shared cups, two still at Chicago and Michigan. Now they’re cute fountains but instead of the cups they have troughs for water for carriage horses.”

Which brings up another point. While I always assumed that once it was built, a fountain stayed in one place. But that’s not necessarily so. According to Borzo, fountains were moved quite frequently.

Researching the 125 existing outdoor fountains in the city wasn’t easy.

“There’s no record of many of them,” he says, noting there are records of “lost” fountains that no longer exist. Others are slipping away.

“Laredo Taft, great sculpture artist, made two of the greatest fountains—the Neo-classical bronze Fountain of the Great Lakes right next to the Art Institute which shows five maidens each holding a shell with the water pouring from one shell to the next—it’s elegant, beautiful and large,” says Borzo. “He had another one that was a failure called the Fountain of Time. It’s made out of

Does he have a favorite fountain?

thin concrete and is wearing away and there’s no way to prevent that.”

“My favorite is the one I’m spending time with at the moment,” he says but then relents. “There are six fountains at the base at the AON Center. The nice thing is you don’t haveto pay admission and at night they’re lit. It’s fountain heaven.”