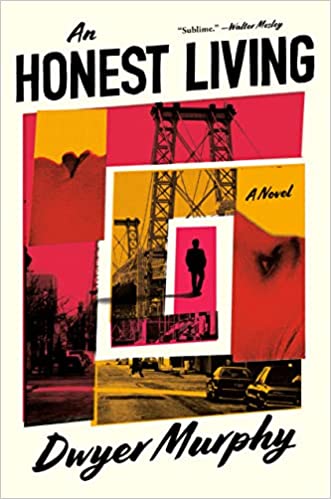 “Noir land is always smoke and mirrors, and for those who like entering that world, be assured that Murphy is already at work on his next book.”

Anchored in life by little except a few friends, a love of books and cinema, and his nascent law practice—a downward slope from his previous position with a prestigious law firm—we never learn the name of the narrator in An Honest Living, Dwyer Murphy’s first novel. Even his clients seem unsure of who he is, and when one gives him a going away present with his name misspelled, our narrator can only ruefully observe “they were only off by a few letters.”

A guy like this makes a perfect patsy and that’s what happens when Anna Reddick hires him to determine if her husband is selling off her valuable collection of rare books. It seems easy enough. Staging a meeting with Reddick’s husband at the Poquelin Society which he describes as “a scholarly society dedicated to the art, science and preservation of the book, whatever that meant,” he quickly scores the proof he needs.

Case solved. Ha! As it could be that easy in a neo-noir novel set in a time and place where everyone seems to have a secret to hide and nothing is as it seems. And that applies also to the people the detective meets. It turns out the woman who hired our detective is not Anna Reddick.

Now, one of the noir fundamentals dictates that there’s a femme fatale, the kind of dame a hero shouldn’t fall for, but of course, always does. And that dame is the real Anna Reddick, a successful author and heir to old New York money. She hires and beguiles our detective to investigate the disappearance of her husband. Marital strife, a possible suicide or maybe murder, theft, and mystery—why wouldn’t you fall for a woman like that?

There are layers to this droll, atmospheric novel including the inside jokes the author wants us to get. If you’re wondering about the Poquelin Society, don’t bother trying to join. It doesn’t appear to exist, at least according to a Google search. But there was a French playwright and actor named Jean-Baptiste Poquelin, though he was better known by his stage name, Molière.

But the biggest of the wink and nods is for movie buffs familiar with the 1974 Jack Nicholson and Faye Dunaway movie Chinatown, directed by Roman Polansky. The plot of An Honest Man is an homage to this great noir classic and the book echoes many of its plot components. The book’s title derives from a conversation Nicholson had in the barbershop scene Chinatown.

But Chinatown is all Los Angeles in 1937 and the story revolves around water rights, incest, and murder. An Honest Living is New York through and through from the scenes that our detective spies from the G Train and the window of his brownstone or the streets he walks littered with trash and 24-hour diners. It’s Manhattan before the financial meltdown—urban, somewhat gritty, and unhomogenized.

Murphy has taken that time period and our knowledge of the looming crisis and created a compelling mystery set in a world of jaded hopes and ambiguous relationships. There’s the overwhelming sense that the other shoe will drop and when it does, it will come down heavy on our somewhat hapless narrator.

Noir land is always smoke and mirrors, and for those who like entering that world, be assured that Murphy is already at work on his next book.

This review previously appeared in the New York Journal of Books.

Published by Viking Books, it is also available in audiobook and Kindle formats.

Upright Oatmilk: The New Expert-Approved Milk Alternative That Is Just As Nutritious As Dairy

Three Charming Villages on the shores of Lake Chapala