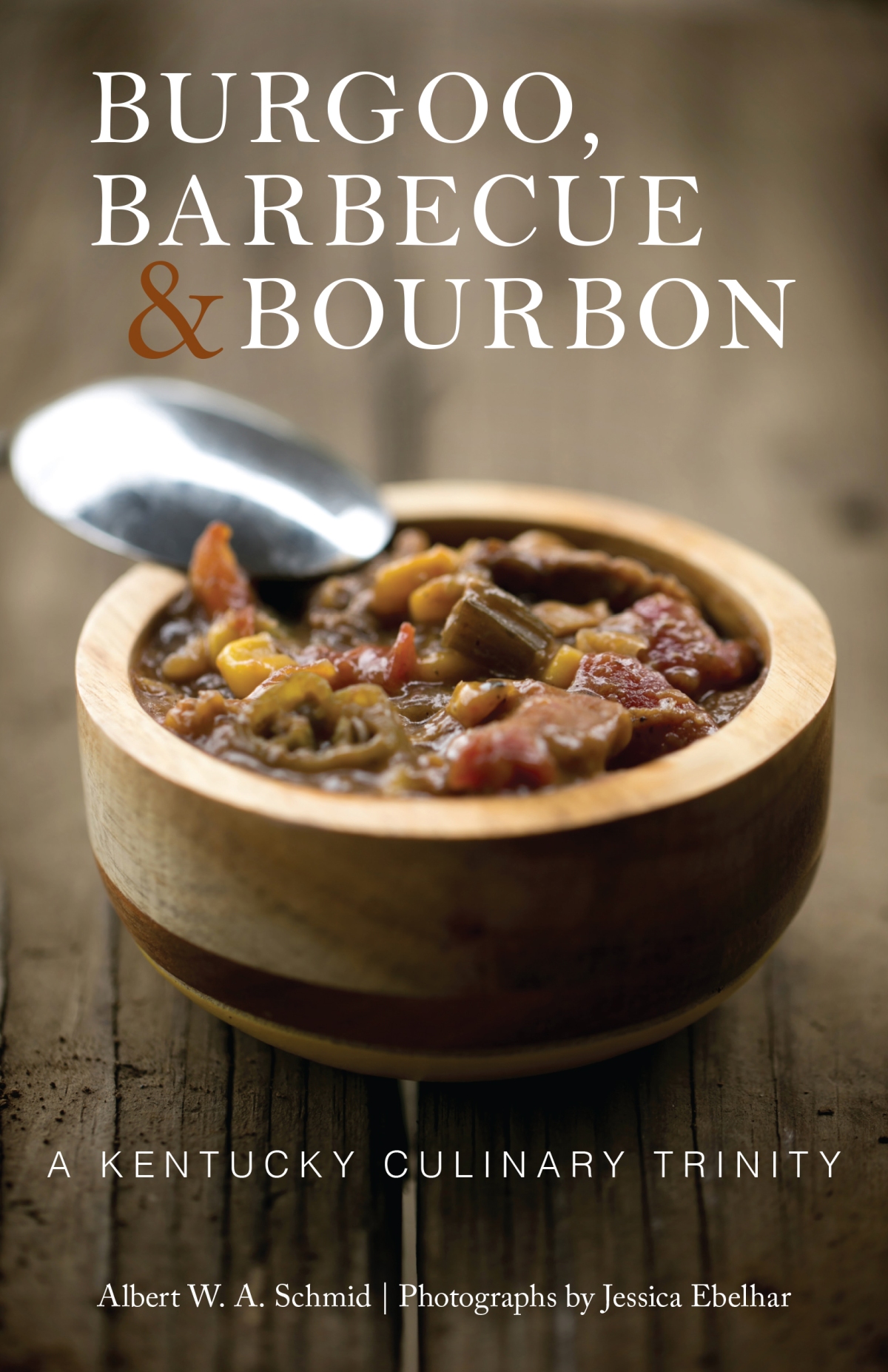 Burgoo, barbecue and bourbon, historically acknowledged as the trinity of good taste in Kentucky, have traditional roots going back to the days of Daniel Boone. Albert W.A. Schmid, a chef and food historian, delves deep into the cultural heritage of these foods in his book, Burgoo, Barbecue, and Bourbon: A Kentucky Culinary Trinity (University Press of Kentucky 2021).

Known as “the gumbo of the Bluegrass,” burgoo is a meat stew consisting of a variety of meats that were often smoked as that’s one of the ways they preserved food back then. The list of ingredients included at least one “bird of the air” and at least one “beast of the field.” The latter could include squirrel, ground hog, lamb, pork jowl, and rabbit. Added to that were whatever vegetables (think corn, tomatoes, turnips, potatoes, carrots, onions, okra, and lima beans) were either in season or still stored and edible in the larder. Sometimes oysters, oatmeal and/or pearl barley were thrown in as well. Schmid also includes, among his many burgoo recipes, one that feeds 10,000 which calls for a ton and a half of beef (I’m not including it but if you’re expecting a huge crowd over email me and I’ll send it) and another that makes 1200 gallons.

“Often you’ll find this dish paired with one of the Commonwealth’s other favorite exports, bourbon, and the state’s distinctive barbecue,” writes Schmid, who immersed himself in archives of early cookbooks.

He takes us back to the days of Daniel Boone, uncovering forgotten recipes of regional dishes and such lost recipes as Mush Biscuits and Half Moon Fried Pies. There are numerous recipes for burgoo starting from early pioneer days, each unique depending on the region, food tastes, and what ingredients were easily sourced. Burgoo was an early community dish with people coming together to prepare it in vast amounts for celebrations.

Women would gather for peeling parties which meant endlessly peeling and dicing vegetables while men would stir the ingredients as they simmered in the huge pots throughout the night, most likely with sips of bourbon to keep them enthused about the task. Whether women got to sip bourbon too, we can only hope so. But in an age where water wasn’t safe to drink and even children were given wine, cider, small beer, and the dregs of their parents sweetened spirits to drink, I’m guessing so.

The Mysterious Name of Burgoo

As for the name burgoo, well, no one, not even Schmid is sure where it comes from.

“It may have described an oatmeal porridge that was served to English sailors in the mid-1700s, or it may have come from the small town of Bergoo, West Virginia,” Schmid hypothesized. The word might also be a slur of bird stew or perhaps bulger; it could also be a mispronunciation of barbecue, ragout, or an amalgam of the lot. If the oatmeal story is true, burgoo continued as a military staple as it became a hearty stew for soldiers who could travel light and hunt and gather ingredients ‘from wild things in the woods’ once they stopped moving for the day—so they did not have to move the supplies from one location to another.”

Of course, a hearty burgoo demands a great bourbon drink and Schmid offers quite a few of those as well. One name I’m particularly taken with is called Kentucky Fog, presumably because over-consumption left one in a fog. Other great names for bourbon drinks mentioned in the book are Moon Glow, Bourbaree, and the Hot Tom and Jerry.

The following recipes are from Burgoo, Barbecue, and Bourbon.

Combine the ingredients in a punch bowl and serve.

This recipe is used at Keeneland, the famous racetrack in Lexington, Kentucky and dates back to 1939.

Heat the oil in a large Dutch oven. Brown the stew meat with the herbs and garlic. Add the remaining ingredients, except the cornstarch, and cover with water. Bring to a boil, reduce heat, and simmer for at least 3 hours. Adjust seasonings to taste and thicken with cornstarch.

Boil the water; add the lard and butter; to this mixture add

the cornmeal, egg yolks, and baking soda. Stir in the buttermilk and stiffly beaten egg whites. Add the bourbon and pour into a buttered casserole dish. Bake for 35 minutes.

Cream the butter and sugars until fluffy. Add the egg yolks and beat well. To the butter and egg mixture, add the soaked fruit and the remaining liquid alternately with the flour. Reserve a small amount of flour for the nuts. Add the nutmeg and baking powder. Fold in the beaten egg whites. Add the lightly floured pecans last. Bake in a large, greased tube pan that has been lined with 3 layers of greased brown paper. Bake for 3–4 hours. Watch baking time carefully.

Store any leftovers in an airtight container in the refrigerator.

Richard Hougen was the manager of the Boone Tavern Hotel of Hotel and Restaurant of Berea College and the author of several cookbooks, including Look No Further: A Cookbook of Favorite Recipes from Boone Tavern Hotel (Berea College, Kentucky), Hougen includes the recipe for Boone Tavern Cornsticks. He notes at the bottom of the recipe, adapted here, how important it is to “heat well-greased cornstick pan to smoking hot on top of the stove before pouring in your batter.

Sift the flour, cornmeal, salt, and baking powder together.

Mix the baking soda with the buttermilk, and then add to the dry ingredients; beat well. Add the eggs and beat. Add the lard. Mix well. Pour the batter into very hot well-greased cornstick pans on

top of stove, filling the pans to level.

Place pans on the lower shelf of the oven and bake for 8 minutes. Move the pans to the upper shelf and bake for an additional 5–10 minutes.

Upright Oatmilk: The New Expert-Approved Milk Alternative That Is Just As Nutritious As Dairy

Three Charming Villages on the shores of Lake Chapala