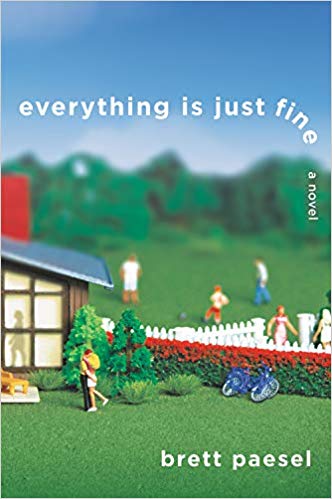 Everything is Just Fine, a social satire about families on a Beverly Hills soccer team for 10-year-old boys told partially in e-mails, explores the secrets and failings of the parents as they connect with each other throughout the season’s wins and losses.

Written by Brett Paesel, who also authored the bestselling Mommies Who Drink: Sex, Drugs, and Other Distant Memories of an Ordinary Mom, the book could have been full of stock characters. We have the divorcee who drinks too much and spends way too much time flirting with other women’s husbands, the vaguely zoned-out housewife who keeps telling herself she is really, really grateful for what she has until she lands in bed with the sexy Latin soccer star who is helping coach the team and Coach Randy, who after losing his job, hides out at the library so his wife doesn’t know he’s unemployed.

But Paesel goes beyond the stereotypes and we come to know and care about these people as we follow what they’re dealing with in their lives.

“Because of an over-parenting snafu–I wanted to get my son on his friend’s team–I ended up in the Beverly Hills soccer league,” says Paesel about what inspired her to write her book. “My neighborhood league would have been much more modest. Suddenly, I was in a world that was rarified. The fields are lovely and have shade, parents lived in McMansions and some of them even owned restaurants. My son’s team played Beckham’s kid’s team. Paparazzi regularly staked out the games. Will Farrell was a coach at one point. My son wasn’t a gifted player and he landed on a team that really didn’t have a super-strong athlete, but the coach was hugely enthusiastic, and they became the little team that could. The coach sent long e-mails giving shout-outs to each player. I remember he called my son a Lion which he wasn’t – he was deathly afraid of the ball. I started out wondering what was going on with the coach because he was so zealous and seemed to have lots of time to craft these e-mails.”

At first Paesel thought she was writing a short story parody of the email chain she was reading but soon started feeling compassion for her characters.

“I wanted to know them better,” says Paesel who is also an actress and producer. “They are all very flawed people, but I was moved by their intense desire to connect – even when they fell disastrously short.”

Though she initially based most of her characters on people she knew, Paesel says they quickly became their own people and so now, when she sees them in her mind, she no longer sees the real people they were based on.

Does she worry that someone will know themselves when reading her book?

“People never recognize themselves in my writing for some reason,” says Paesel. “I found this to be true in my memoir writing as well.”

Besides a good read and a lot of laughs, Paesel hopes that people put her book down feeling a sense of belonging to this great human drama we get to live through.

“The characters in my book get too caught up in things that are simply unimportant and won’t get them the happiness that they are desperately seeking,” she says. “At the heart of my book is an exhortation to keep paying attention to what’s really important. Which is always – very simply – love.”

What: Brett Paesel has several book events in Chicago.