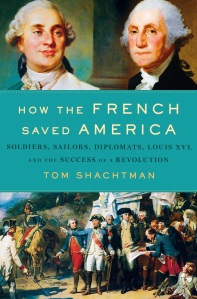 Give credit to France for the forming of our nation because without their help we might still be, as stereotypes go, eating crumpets, drinking tea and speaking with British accents.

That’s the focus of a new book by noted author Tom Shachtman in his latest book How the French Saved America: Soldiers, Sailors, Diplomats, Louis Xvi, and The Success of a Revolution (St. Martin’s Press 2017; $27.99).

While many of us know about the Marquis de Lafayette whose help during the Revolutionary War was so vital that we’ve named cities after him–Lafayette, Indiana and Louisiana come quickly to mind. But the Marquis wasn’t the only Frenchman who risked his life to help America achieve its independence. Indeed, according to Shachtman in his extensively researched and wonderfully written book, almost ten percent of those who perished fighting for our cause were from France.

Those surviving include not only Lafayette but also Admiral François Joseph Paul de Grasse, commander of the French fleet during the Battle of the Chesapeake.  He and his men created a naval blockade of Yorktown thus allowing General George Washington and yet another Frenchman, Comte de Rochambeau, to defeat British Lieutenant General Charles Cornwallis in what was a decisive battle. Another, Louis Duportail founded the Army Corps of Engineers.

Even Shachtman, who has written or co-authored more than thirty books as well as documentaries for ABC, CBS, NBC, PBS, and BBC, ta 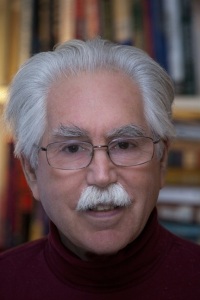 ught at New York University and lectured at Harvard, Stanford and the Library of Congress, at first didn’t realize how much the French impacted America’s victory. He first became aware of France’s significance when writing another book Gentlemen Scientists and Revolutionaries: The Founding Fathers in the Age of Enlightenment and decided to pursue the subject. The assistance the French provided included, among a long list, money to pay our troops, weapons, safe harbor for privateers, troops, battlefield leadership and engineering expertise.

So why is France’s contribution not better known?

“We are too invested in our own myths to acknowledge how much we owe our freedom to France,” says Shachtman, noting our belief in our rugged individualism and self-sufficiency could also play a big part. “The war might not have been won at all, or not been won by 1783 if not for the French.”

What: Tom Shachtman has three talks and book signings in the Chicago area.

What: Learn & Lunch with Tom Shachtman

When: Wednesday, October 18 at noon