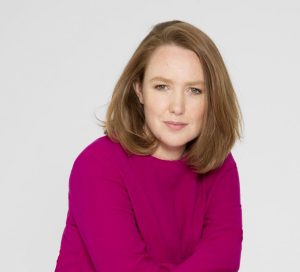 king, author of the international best-selling The Girl on the Train, which was translated into 40 languages and made into a movie, will be in Chicago next Friday, May 19 to talk about her newest book, Into the Water (Riverhead Books 2017; $A tense, psychological thriller told from the different viewpoints of all those involved in the life—and possibly the death-of Nel, an artist, who either fell, jumped or was pushed into what locals call “the drowning pool,” a placid body of water by an old mill with deadly undercurrents and weeds that easily ensnare. It was a place where in Medieval times, trials by water took place.

“After being tied up, they’d toss you into the water and if you rose to the surface you were guilty and if you sank, you were innocent,” says Hawkins, who, born in Zimbabwe, now lives in London. A journalist for 15 years, she also wrote romantic comedies.

“I found that even when I was writing romances, I kept adding darker undertones,” she says. So she gave into her urges for deeper and more mysterious stories starting with

Into the Water revolves around the memories of the characters as they come to grip with the mysteries behind Nel’s death and also her life. The idea of how we all remember things differently and how our memories become our own realit

“I thought about how we tell the stories of our lives and how you remember something that is absolutely fundamental to who you are, and what would happen if you had misremembered it or if you disagreed with someone who remembers it as completely different,” she says.

Hawkins, who set her story in Beckford, a fictional English village dissected by a flowing river, chose water as her theme for this novel, because it fascinates so many of us. The river is a character with its own personality, one with a long evil history of luring women in particular to their deaths. She recalls thinking, when walking alongside a pretty stream, what a pretty place for a swim. But then she rounded a bend and discovered a dead animal along the shallows of the shore.

In other words, says Hawkins, nothing is as it seems.

What: Paula Hawkins in conversation with Mary Kubica

Cost: $39.29 for one copy of “Into the Water,” event admission and a service fee