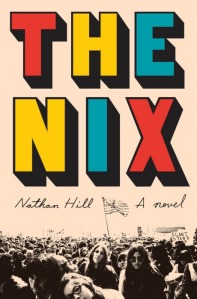 “I guess I gave myself permission to keep going,” says Hill, about The Nix (Knopf 2016; $27.95), his recently published—to rave reviews—novel that covers a lengthy time period and numerous geographic locations as he tells the story of Sam Andresen-Anderson, a disgruntled professor at a small college near Chicago. Unable to muster the energy to complete a book for which he was paid a large advance and fearing the publisher will sue to get the money back (it’s already been spent), he is also grappling with a plagiarizing student who might also sue him and pining for his childhood love. What’s a guy

to do? For Sam, it’s spending too many hours playing the World of Elfscape, a World of Warcraft-like computer game.

But Sam sees salvation when his mother, who long ago abandoned him, is caught on video throwing rocks at a politician. The video goes viral and Sam convinces his publisher to change out his unwritten novel for a bio of his mother. It’s also a way to learn who she really is—a radical feminist as the media portrays her or the girl who married her high school sweetheart.

A nix, in Norwegian mythology, is a spirit who sometimes appears as a white horse and steals children away. In Hill’s book, it’s anything you love that one day disappears, taking with it a piece of your heart.

“Hill has so much talent to burn that he can pull off just about any style, imagine himself into any person and convincingly portray any place or time,” writes the New York Times in a review. “The Nix is hugely entertaining and unfailingly smart, and the author seems incapable of writing a pedestrian sentence or spinning a boring story.”

“I just lived with these characters for a very, very long time and the more I wrote, the cleared their story became,” says Hill, who grew up in Streamwood, teaches at a college in Florida and now spends summers in Chicago where his wife, a classical musician, plays for the Grand Park Symphony.

“One of the nice things about writing this book besides getting to know the characters so well, was spending long, long afternoons in the Chicago History Museum wearing white gloves and looking at old photos,” says Hill who is 50 pages into his next novel—a plus for those who love The Nix as it means they might not have to wait eight years to see it on the bookshelf.

What: Nathan Hill Book signing
When: September 15 at 7pm