When six-year-old Gonker, a much loved family pet decided to do some typical canine spontaneous off-site exploring when navigating the Appalachian Trail with his owner Fielding Marshall, he was expected to shortly return. But after a while, while calling the six-year old Golden Retriever’s name, Marshall began to worry that his dog was lost. To make it even more serious, Gonker suffered from Addison’s 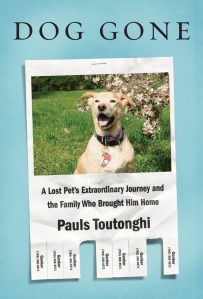 —a serious disease that effects dogs and is characterized by a deficient production of glucocorticoids and/or mineralocorticoids. If Gonker doesn’t get the necessary hormone medication needed to control the disease, he will die within 23 days.

The story of the search for Gonker is told by Marshall’s brother-in-law, journalist Pauls Toutonghi is his latest book, Dog Gone: A Lost Pet’s Extraordinary Journey and the Family Who Brought Him Home (Knopf 2016; $25). It’s a tale of a family’s search to find their dog in time and also of how, after Fielding’s mother, Virginia, sets up a command center, the community and ultimately the country. Indefatigable—she long had mourned the loss of her own dog decades ago, Virginia uses a map and phone book to jumpstart what will become a nationwide network of those wanting to help find and save Gonker. Relentlessly contacting radio stations, park rangers, animal shelters, the police and local retail stores, Gonker’s disappearance and the family’s search gets a write-up in a local newspaper where it is picked up by AP. Before long the nation is offering their help in finding the missing dog.