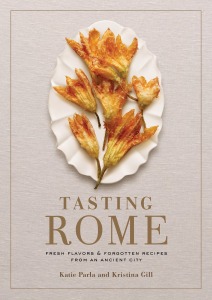 “A lot of what I do is covering the lost or disappearing foods in Rome,” says Parla, a writer, blogger and certified sommelier who earned a master’s degree in Italian gastronomic culture from Università degli Studi di Roma “Tor Vergata”. “Food in every city is evolving as is the way we eat and in Rome that comes about with the change in family structure and such factors as their very high unemployment, very low wages, and a high cost of living. Women are working now and there’s not the time for long complex dishes which take hours to make. There’s a myth that there are no bad meals in Rome but there’s terrible food here.”

But, continues Parla who will be at Monteverde in Chicago on May 16 cooking from her book, there are also innovations and improvements as well. Farmers’ markets are opening up, some places still serve the classic dishes and chefs are evolving in how they make classic dishes, turning them into lighter fare.

“Rome continues to be an important place for food,” says Parla, noting that she just celebrated her 13th year of living in Rome where she moved after graduating from Yale.

Parla takes an intense interest in delving deep into the city’s culinary roots discovering fascinating microcosms such as how the recent influx of Libyan Jews is impacting long established Jewish-Roman cuisine.

st Jews came to Rome about 2000 years ago,” she says. “A decade or so ago, thousands of Jews left Libya and because of the Colonial relationships between Rome and Libya there were all these people who brought the Libyan Jews to Rome and housed them. Now there are about 4500 Libyan Jews in Rome and about 13,000 Jews in Rome altogether so it’s a pretty large faction of a small group. Many Libyan Jews own restaurants in the Jewish quarter, so you’ll find their richly flavored and spicy foods different than local Jewish classics like deep fried artichokes, pezzeti fritti–battered and deep fried vegetables, aliciotti con l’indivia which are anchovies with endive. It’s a fascinating turn in Roman food.”

Though drinking in Rome and in Italy seems synonymous with wine, there’s also an emerging cocktail culture too that was important to include in her book says Parla.

When asked to recommend recipes in Tasting Rome for beginners, Parla says that Involtini di Manzo or beef rolls—slices of rump roasts layered with prosciutto and julienned carrots and celery and braised in a tomato and white wine sauce–are a delicious and simple one pot meal.

“Recipes when taken together with the culture and the history tell the complete story,” says Parla who offers as an example cacio e pepe, Roman pasta dish using ingredients that stretch back millenniums.

“Cacio is the local Roman dialect word for Pecorino Romano, a sheep’s milk cheese made in the region since ancient times,” she writes in her explanation of the recipe citing the dish’s provenance.

“Pepe (pepper) was an important ingredient in Roman cuisine as it was super valuable spice stretching back into Roman antiquity and was a symbol of Rome,” says Parla, expanding on the subject as we chatted on the phone. “During the Renaissance it was the symbol of nobility.”

Parla also offers advice to ensure the sauce is perfect—not to dry nor soupy.

“Finely grated Pecorino Romano and very hot water are essential to a smooth sauce, while fresh, coarsely ground black pepper gives flavor and texture–the most important component of a flawless cacio e pepe, however, is speed because if the water cools before melting the cheese, the sauce will clump,” she says noting that they adapted the recipe made by Leonardo Vignoli’s at Cesare al Casaletto for home cooks.

“Wherever you are when you cook with the Roman spirit which is cooking simply with fresh ingredients,” she says, “Then the food speaks for its self.”

Bring a large pot of water to a rolling boil over high heat. Salt the water. When the salt has dissolved, add the pasta and cook until al dente.

Meanwhile, in a large bowl, combine 1½ cups of the Pecorino Romano, the pepper, and a small ladle of pasta cooking water. Using the back of a large wooden spoon, mix vigorously and quickly to form a paste.

When the pasta is cooked, use a large strainer to remove it from the cooking water and quickly add it to the sauce in the bowl, keeping the cooking water boiling on the stove. Toss vigorously, adjusting with additional hot water a tablespoon or two at a time as necessary to melt the cheese and to obtain a juicy sauce that completely coats the pasta.

Plate and sprinkle each portion with some of the remaining Pecorino Romano and pepper to taste. Serve immediately.

Cost: $120 includes dinner, wine, a copy of the cookbook, tax and gratuity.