“The history of contemporary American conservatism is a story of disappointment and betrayal,” writes E. J. Dionne in his latest book Why the Right Went Wrong: Conservatism–From Goldwater to the Tea Party and Beyond (Simon & Schuster 2016; $30). 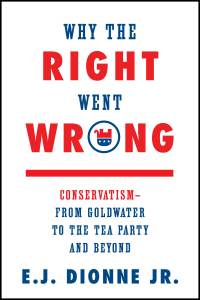 In a recent phone interview, Dionne, a senior fellow, Brookings Institution; columnist for The Washington Post, described how Republican presidents such as Richard Nixon, Ronald Reagan, George H.W. and George W. Bush have had to make promises they couldn’t keep, perpetuating a cycle of disillusionment that has pushed the GOP steadily rightward.

“If you want to understand where Trump came from it’s from the anger and the resentment of white blue collar workers,” says Dionne. “There is a nostalgia for the 1950s where the structure of the economy and the family was stable. But all those were underwritten by an economic value forged by the unions that allowed working class people to support their families. If you care about the family, you have to care about the underpinnings of the family. Part of my book is a plea and argument to those who are less progressive that there are economic reasons for the breakdown.”

Dionne, who describes himself as a strong supporter of unions and the way they created a thriving middle class, says that conservative leaders have made promises that simply can’t be kept.
“They promise to reduce the size of government but no Republican has been able to reduce the size of government—it was the same size at the end of Ronald Reagan’s two terms as at the beginning. They talk about deregulation but most Republicans want safe water, less air pollution and regulations that ensure safety.”

In writing his book, Dionne draws upon his more than three decades of writing political commentary as well as intensive research. As t

his election year advances, he sees many of his ideas reflected in what the candidates are espousing as they try to out-do each other on conservative views including immigration (“you’re not going to be able deport 11 million people,” he says about their promise). He also counters the right’s anti-government rhetoric.

“Medicare may be a government entitlement program but we earned it,” he says. “I think that is a proper form of conservatism—societies hold themselves together by changing when they need to, Medicare made it so that people have health care.”

What:  Author E. J. Dionne discusses “Why the Right Went Wrong: Conservatism–From Goldwater to the Tea Party and Beyond”