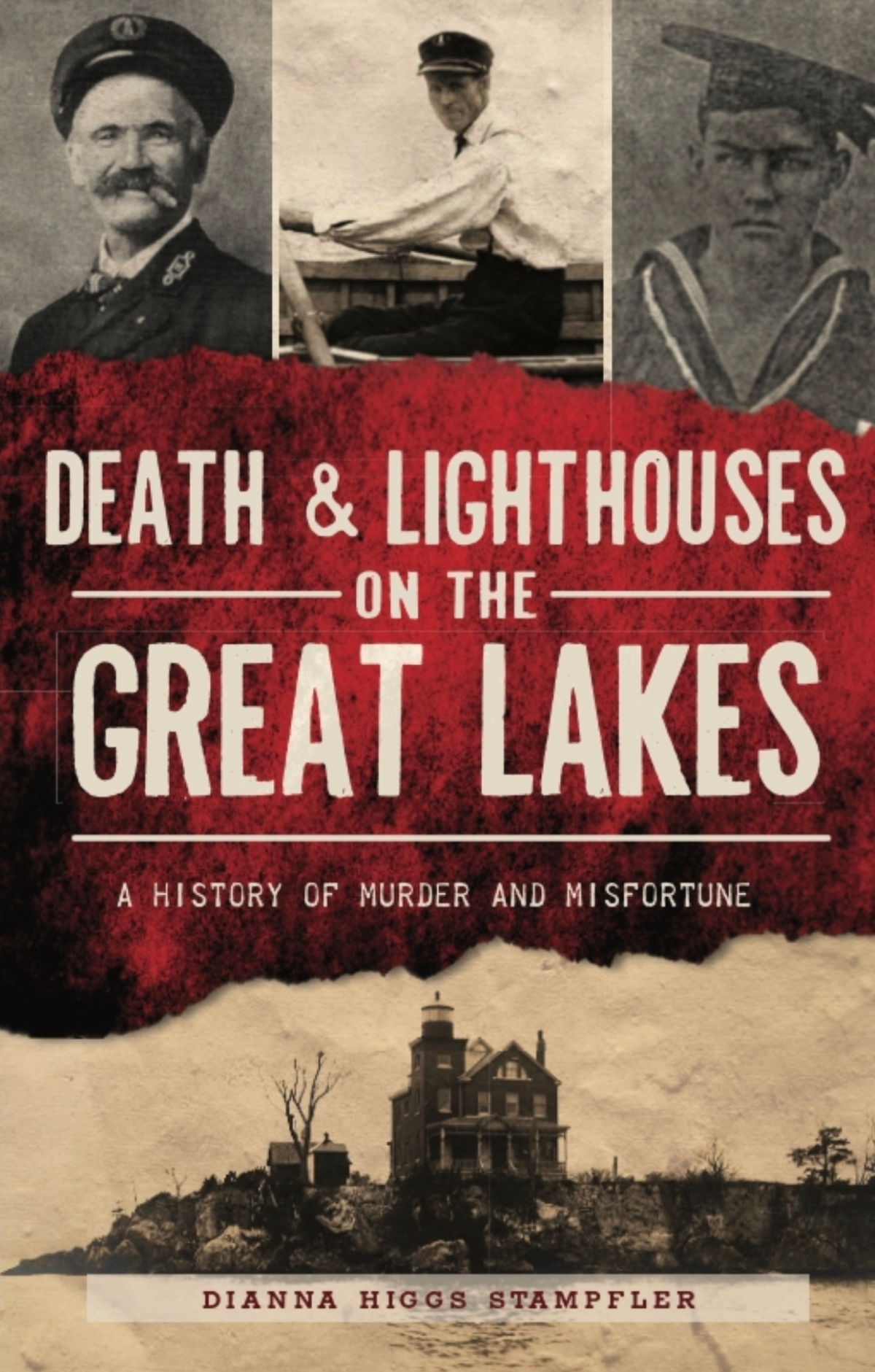 Combining an intense interest in both true crime and maritime history, Dianna Higgs Stampfler’s latest book, Death & Lighthouses of the Great Lakes: A History of Misfortune & Murder (History Press 2022), recounts the darker stories of  the fascinating lighthouses lining the shores of the Great Lake states.

Stampfler, whose previous book was Michigan’s Haunted Lighthouses, first started researching lighthouses 25 years ago while working for the West Michigan Tourist Association and continued after starting her own business, Promote Michigan. But even she made new discoveries

“Many of the locales, lights, and keepers were new to me, as were their stories,” says Stampfler, who is a member of many maritime and lighthouse organizations. “Some of the stories were so tragic that newspaper coverage was significant. Many stories even appeared in papers throughout the country, which emphasizes their scope.”

Take the story of head keeper, George Genry, and his assistant, Edward Morrison who both disappeared from their posts on Grand Island in June of 1908.

“They just vanished,” says Stampfler. “Everything was left at this remote lighthouse including provisions on the dock, coats on the hook, and food on the stove. A month later, what was determined to be Morrison’s battered and decomposed body was found floating in a boat near the shore. A month later, the remains of what they determined to be Genry were found on a nearby beach. There are several theories about how the two men died, some more nefarious or controversial than others, but the exact truth will never be known.”

The earliest story in her book dates back to the beginning of the 19th century at Gibraltar Point Lighthouse in Toronto – the earliest and longest standing lighthouse on the Great Lakes. In 1809, John Paul “J.P.” Radelmüller, a German immigrant, was appointed as lighthouse keeper for Gibraltar Point. Radelmüller had an interesting history, having worked as a servant for the Duke of Gloucester before moving to Upper Canada.

“Much of his early history is documented by J.P. himself,” says Stampfler noting that a seven-page handwritten letter he wrote is cataloged at the Library and Archives Canada. “Some believe J.P. was a homebrewer or bootlegger, and that it was through these activities that his murder occurred. Two men from a local military outpost were charged with his 1815 death, but they were acquitted of all charges.”

Stampfler discovered this story through a chat board where another historic lighthouse enthusiast, Eamonn O’Keeffe has been extensively researching Radelmüller, Indeed, her own research encompassed Googling, old newspaper archives, local libraries, maritime based historical societies, and genealogical sites.

She also visited island lighthouses such as Grand, South Bass, and the many in Door County, Wisconsin.

“I went not only to do research but also to walk the grounds and see the lights,” she says. “That really helped me connect to them.”

Autographed copies of Death & Lighthouses on the Great Lakes for $21.99 (plus shipping/handling and tax)are available at PromoteMichigan.com. The book is also available through online booksellers like Amazon and Barnes & Noble as well as in local bookstores.