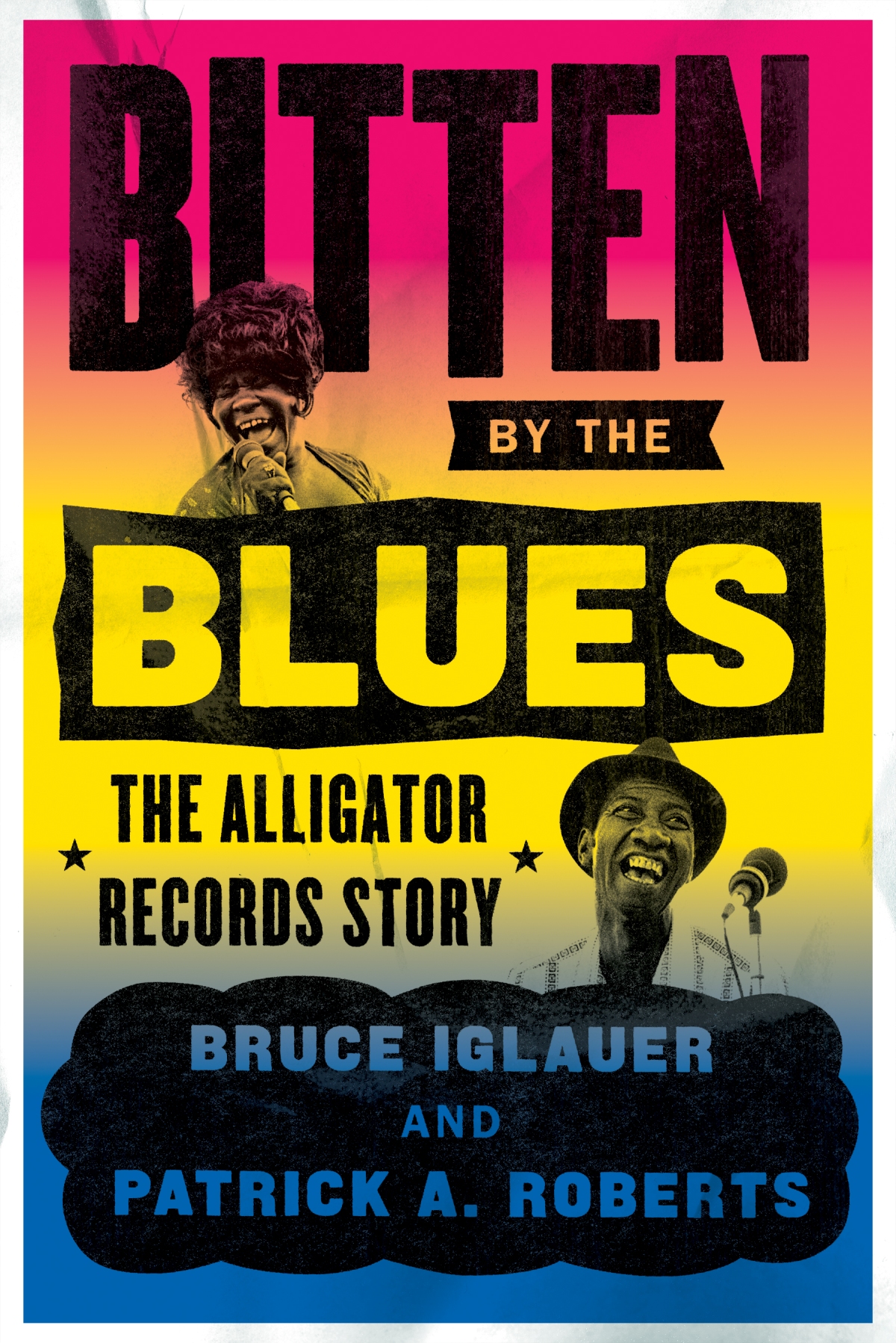 Bruce Iglauer, president and founder of Alligator Records, describes himself as an actively bad musician who can’t read music, and can only sometimes sing on pitch. Yet he was able to turn a $2500 inheritance into the largest independent record label in the world. Bitten by the Blues: The Alligator Records Story (University of Chicago Press 2018; $30), co-authored with Patrick Roberts, an associate professor in the College of Education at Northern Illinois University, is Iglauer’s memoir encompassing more than a half century of the blues, not only in Chicago but throughout the globe.

Iglauer and Roberts chatted with Shelf Life blogger Jane Simon Ammeson about their book as well as their working relationship.

Jane: Bruce, you started off in the mailroom and worked your way up to owning your own independent blues record label. Give us a little background on how that happened and how you took some of your inheritance to start Alligator Records. Would it be possible to do something like this today?

Bruce: My inheritance was a ridiculously small amount of money to start a record label. I spent every penny recording that first Hound Dog Taylor album and pressing a thousand copies. With the help of a well-established distributors, I was able to get my record into a lot of stores, and with the help of a format of radio called “progressive rock”, I was able to score a lot of radio play. Now almost all those distributors are gone, along with all but a handful of record stores. “Progressive rock” radio disappeared decades ago. So, the path I took is no longer viable. But at the same time, these days, with digital recording, it’s possible to record an album for a few thousand dollars or maybe even less. And using services like CD Baby or The Orchard, it’s possible for that album to be available online without ever being in the form of a CD or an LP. However, without the know-how and connections that an established label has, it’s almost impossible for self-produced artist or a startup label to get the media attention that his or her music may deserve. So—can you make a record on a tiny budget like I did with Hound Dog Taylor? Yes. Can you make the world know that your music exists? These days, that’s very, very difficult. And the streaming services that are taking over as the way people listen to music pay so little that making enough money to continue to make commercial recordings is almost impossible.

Jane: Did you have an abundance of confidence or was that a scary time for you?

Bruce: I was scared, and I only had enough money to make one record. I knew that if I ever wanted to make a second one, I’d have to sell enough of the first. So, I knew that any mistake could be the end of my brand new label. But I was determined and believed in the music I was recording. I figured if I loved the blues so much, other people would too—if they only heard it.

Jane: Do you find it amazing that you’re not a musician but have been so successful in the music world?

Bruce: I’ve learned a lot about the blues from spending hundreds of hours with blues musicians, and I can speak their language. I’ve produced or co-produced over 130 albums, and my combination of some musical knowledge and unlimited enthusiasm seems to inspire blues musicians to great performances. I often tell musicians—If you record for Alligator, your goal should be to make records where you can say “this is my best music, the music I want my children and grandchildren to listen to.” If musicians don’t want to make their career best records, we don’t want them on Alligator.

Jane: Patrick, what was it like working with Bruce on the book? Did you have a background in the music industry at all? Or did you learn as you went along?

Patrick:  I joke that when I initially sat down with Bruce to begin the project, I worried he wouldn’t have much to say. Nothing could have been further from the truth. We recorded over 100 hours of audio—Bruce talking while I occasionally prompted him with questions or requests for clarification. I don’t have a background in the music industry, and I think this fact helped us write for readers like me who may not have extensive knowledge of blues music or the record business. It’s a very accessible book, and even readers without much blues history under their belts will enjoy learning about some truly remarkable personalities, the great Hound Dog Taylor being one notable example.

Jane: What was the inspiration for writing Bitten by the Blues? Are there take-aways you’d like people to get besides just a good read?

Bruce: The book is not intended to be about me. I see myself as a camera and hope that the readers will be able to see the wonderful, exciting world of the Chicago blues clubs in the 1970s and 80s, when most of the music was in the black community and shared by people who had a vibrant culture and heritage. I also want to give the readers an idea of how blues recordings are created, and to tell them something about the musical giants I’ve been able to work with, tour with, and who became my friends. And I want to give them a look at what it means to be a specialized independent record label, and how the recording business used to work, and how it works now. Mostly, I hope that this memoir will inspire people to listen to some of the charismatic blues artists who have created this timeless, exhilarating music.