“Wisconsin is not just about cheddar; we have a large variety of cheeses which consistently win awards.” Kristine Hansen, author, The Wisconsin Cheese Cookbook: Creamy, Cheesy, Sweet, and Savory Recipes from the State’s Best Creameries (Globe Pequot Press 2019; $24.95) 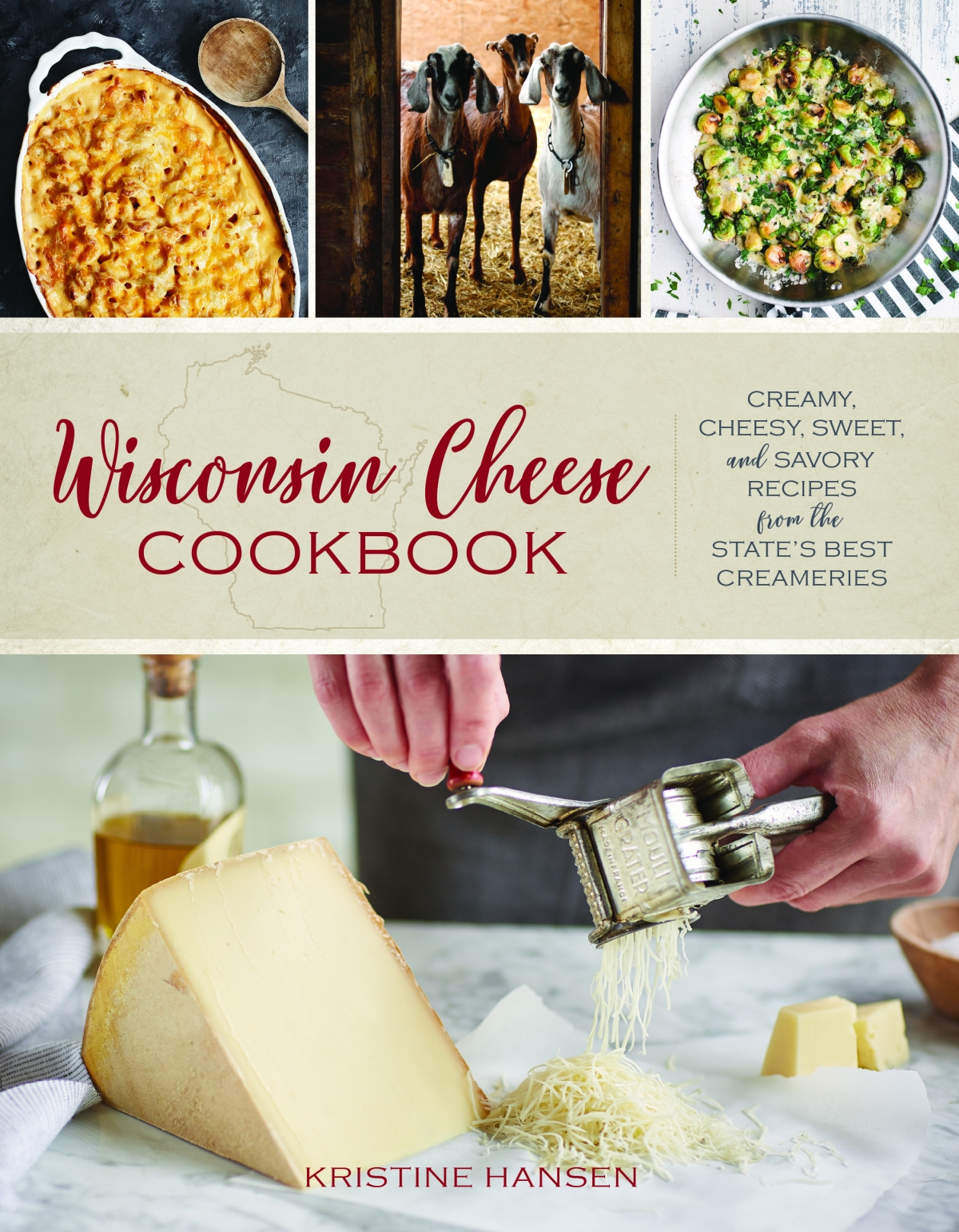 “Some people say that the French have the best cheese but I think Wisconsin cheese is the best and I can say that because I wrote the book on cheese” says Kristine Hansen, who actually did write The Wisconsin Cheese Cookbook: Creamy, Cheesy, Sweet, and Savory Recipes from the State’s Best Creameries (Globe Pequot Press 2019; $24.95). “Wisconsin is not just about cheddar; we have a large variety of cheeses which consistently win awards.”

With over a million cows, the state turns out more than 2.8 billion pounds of cheese per year. Hansen focused on the growing artisanal cheese producers in the state and though her cookbook has 60 recipes (as well as beautiful, lush photos), it’s as much of a travel guide—call it a cheesy road trip if you can excuse our pun–to 28 of the state’s creameries.

“A lot of my friends, when they come to visit, want to know the best cheese places I’ve discovered and ask for directions,” says Hansen, a Milwaukee-based journalist covering food/drink, art/design and travel whose articles have appeared in many magazines and websites including Midwest Living, Vogue and on Travel + Leisure and Conde Nast Traveler.

Writing the book meant lots of time on the road, visiting corners of the state where she’d never been and learning the intricacies of cheese making.

So, what makes Wisconsin cheese so great? After all, there are cows throughout the Midwest, but Indiana, Illinois and Michigan don’t have nearly the same amount of small batch hand crafted cheesemakers as the Badger State.

“A lot of Swiss immigrants settled here, particularly in Green county,” says Hansen about the home of Green County Cheese Days, the oldest and largest food fest in the Midwest. The festival honors the area’s Swiss heritage (their Swiss credentials are such that there’s also Wilhelm Tell and Heidi festivals) cheesemaking tradition. The later includes a dozen creameries producing over 50 varieties of award-winning cheeses as well as the only domestic maker of Limburger and the only U.S. factory making 180-pound wheels of Old World Emmenthale.

Other creameries mentioned in Hansen’s book include the Door County Creamery in Sister Bay in scenic Door County, where visitors where visitors can not only sample cheese and take a farm tour but also participate in a 40-minute goat yoga session.

“ClockShadow is one of only two urban creameries in the country,” says Hansen about this Milwaukee cheeserie which offers tours. “One of the reasons they opened is they wanted people in Milwaukee to be able to get fresh cheese curds without having to drive very far.”

As an added plus, adults can also combine the experience by taking a tour of the Milwaukee Brewing Company which is just across the street.

“People think the best Gouda comes out of Holland, but Marieke Gouda is wonderful,” says Hansen.

Located in Thorp, Marieke Gouda has a product store, newly opened Café DUTCHess and features tours. Across the street, Penterman Farm where the milk for Marieke Gouda is provided by Brown Swiss and Holstein cows, there’s a viewing room and tours as well.

Bleu Mont in Blue Mounds is one of several cheeseries in the state with a cheese cave.

“There are about 500 varieties of cheese of so in Wisconsin, so there’s a lot to choose from” says Hansen. “And the cheeses here are not just for those who live in Wisconsin. Uplands Pleasant Ridge cheese costs $26 a pound and sells in New York City. That says a lot about the state’s cheeses.”