Kenneth Schoon, professor emeritus at Indiana University Northwest, has immersed himself in the history of the Greater Chicago/Northwest Indiana area for decades, writing books starting from the area’s earliest beginnings such as “Calumet Beginnings: Ancient Shorelines and Settlements at the South End of Lake Michigan” and “Swedish Settlements on the South Shore of Lake Michigan.”

In his latest book, “Pullman: The Man, the Company, the Historical Park” (History Press 2021; $21.99), he showcases what once was among  the ultimate company town and is now a Chicago neighborhood. George Pullman, whose last name became synonymous with plush railroad sleeper cars, believed that happy workers were productive workers and so developed his town along the western shore of Lake Calumet in the late 1800s.

I thought I knew company towns having grown up in East Chicago, Indiana my friends whose parents worked at Inland Steel lived in Sunnyside in Indiana  Harbor. On the East Chicago side there was Marktown built in 1917 by Clayton Mark, for those employed at the company he owned, Mark Manufacturing.

But they’re different Schoon tells me. Both Marktown and Sunnyside were residential neighborhoods. But Pullman was an actual town with its own schools, library, churches, Masonic Hall, businesses, and even a band. Garbage and maintenance was paid for by the company.

Though I vaguely knew about the town of Pullman, it had never been on my radar as a place to visit even though it was less than eleven miles from where I lived.

“The same with me,” says Schoon who remembered going to the Florence Hotel, one of the fanciest structures in town, to eat when young never to return until hired by the Historic Pullman Foundation to write about the history of the town for their brochure.

Today we talk about experiences, but that’s what Pullman was all about back then. His sleeper cars were luxurious, but the brand also meant great service. After the Civil War, he hired recently emancipated African American men, to work as porters becoming the largest employer of Blacks in the U.S. Their jobs were to attend to passengers needs by serving food and drink, shining shoes, tidying up the train, making sure the temperature was just right and that lighting fixtures worked.  Black women were hired as maids to take care of women guests on the most expensive cars—babysitting children, helping with their baths, giving manicures, and fixing their hair.

Pullman was no dinky little town. The Arcade Theatre could accommodate 1000 people and Schoon says it was, for a time, the finest theater west of the Hudson River.

With the advent of automobiles and highways, the need for sleeper cars lessened. But luckily many of Pullman’s historic buildings remain including the Florence Hotel which is currently closed for renovations but expected to open within a few years.

“The old stable is now a store,” says Schoon. “The old fire station is still there and of the 600 residential buildings all but three are still standing.”

In an interesting tidbit, Schoon notes that Pullman was originally dry because George Pullman was a Prohibitionist. Luckily for those who  wanted to imbibe, Kensington, the town next door had 23 taverns at the time.

Kenneth Schoon will be signing copies of his book during the Labor Day Weekend at the Grand Opening of Pullman National Monument Visitor Center and Pullman State Historic Site Factory. For more information about times and other events, visit www.pullmanil.org

For her new book King Solomon’s Table: A Culinary Exploration of Jewish Cooking from Around the World (Alfred A. Knopf 2017; $35), Joan Nathan, the multiple James Beard award winner, followed in the footsteps of Jewish traders as they circumvented the globe centuries and even millenniums ago. As they traveled, they brought the food cultures from the lands they’d visited before and adapted new ones but keeping close to their dietary laws, traditions and homelands. 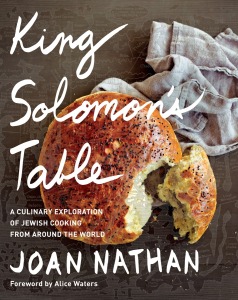 Nathan, who has written almost a dozen cookbooks, recounts the culinary history and geography of these early travelers in her sumptuous new book featuring over 170 recipes.

It begins at the Paradesi Synagogue in Kochi, Kerala where Nathan spies an inscription indicating Jewish traders might have crossed the Indian Ocean from Judea to India during the reign of King Solomon. Already a world traveler, Nathan next made her way to Chendamangalam, a hamlet 20 miles north of Kochi surrounded by a lush landscape of mango, coconut and cinnamon trees and pepper and cardamom vines.

“As I walked toward the bank of the nearby Periyar River, which flows into the Arabian Sea, I imagined ancient Hebrew adventurers and traders arriving on the shores and marveling at the lushness of the terrain,” writes Nathan in the introduction of her book.

And so we too are seduced by her journey into exotic lands, looking at how foods and ingredients have crisscrossed the globe originating far from where we first might have thought.

We chat about Malai, a Romanian cornmeal ricotta breakfast pudding that she features in her book and I tell her how I learned to make a polenta-like dish from my Romanian grandmother.

“Oh mamaliga,” she says, like everyone knows about mamaliga.  But then what would you expect from a woman whose book contains five recipes for haroset, a thick sauce or paste typically made of chopped fruits and nuts. It, like so man 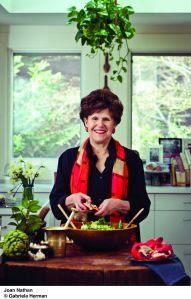 y recipes, has morphed, bouncing back and forth between countries and continents, each time being tweaked just a little and Nathan includes a version from Brazil, Persia, Ferrara and, of all places, Maine.

Asked what recipes she’d recommend for those just starting using her cookbook, Nathan suggests Yemenite Chicken Soup with Dill, Cilantro and Parsley (“a really old recipe,” she says noting that historic records dating back to 12th century the healing power of chicken broth). She also suggests Malai, the Romania dish and Roman Ricotta Cheese Crostata with Cherries or Chocolate, a cheesecake recipe dating back to Imperial Rome in the 1st century. She also included a recipe from her friend, her friend Injy Farat-Lew, an Egyptian-Jew who grew up in Cairo and Paris, for a flourless chocolate cake and one for hard boiled eggs traditionally served ruing Passover on the Seder plate but can be used as a side for any meal.

“This recipe for long-cooked eggs with spinach came from the island of Corfu, Greece to Ancona, Italy, a seaport on the Adriatic coast,” writes Nathan, who first taste the dish in Rome, in the introduction to this recipe which also exemplifies the convoluted origins of food.

As she traveled (Nathan says her quest took her to approximately 30 countries over a six-year time span), the scope of her book changed. But it was all part of her culinary journey and one she continues to take.

Back in Time: Phillipsburg Manor and Gristmill in Sleepy Hollow

Back From the Farm: Family Recipes and Memories of a Lifetime